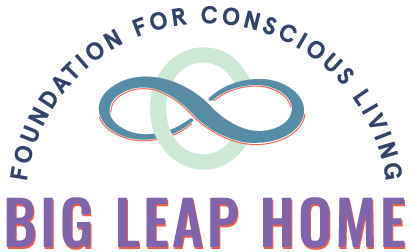 Dr. Vandana Verma Talks About the Four Kinds of Fear

The Science Behind Fear Melters®

Why is learning about fear important?

Biology tells us that fear increases the chances for survival when expressed in friendly ways and, conversely, can lead to anxiety and stress-related disorders when suppressed or undealt with.

The fight-or-flight response was discovered by Walter Canon in the early 20th century. This term has described our body response to fear for over a century. Since then, neuroscientists have come a long way in their understanding and characterized four types of fear.1 These four types of fear are less well understood but highly prevalent in our everyday behaviors and reactions, most of the time without us even noticing.

Why do we feel fear?

Humans have evolved with a variety of innate, hard-wired, automatically activated defense behaviors, termed the defense cascade. Choosing and rapidly implementing the appropriate response in a threatening situation is critical for survival. In animals, behavioral reactions to threats fall into two general categories: 1) those that reduce chances of being noticed by predators, such as freezing (passive), and 2) those that enhance it (to avoid capture), such as fleeing or retaliation strategies, such as fight (active).

Passive and active defenses are mutually exclusive: a prey cannot simultaneously flee and fight, or freeze and flee. Understanding how our defensive responses are controlled in the brain is important for those in high-risk professions who need to perform optimally under stress.

Recently, research scientists have found distinct cells in areas of the brain responsible for flight responses in the amygdala (the fear center in the brain). Two different types of neurons are responsible for fear responses. Activation of one of these set of cells, which expresses corticotropin releasing factor (or CRF—a peptide hormone involved in the stress response that indirectly lowers cortisol), triggers flight. Activation of the other set of cells, which expresses somatostatin (a peptide hormone that regulates the endocrine system and neurotransmission), initiates freezing. The researchers suggest that we can switch rapidly between responses to ensure the highest chance of survival.2

The four types of fear that have ensured our survival for so long, interact with each other in ways that scientists are only beginning to recognize.

Renowned neuroscientist Joseph Ledoux suggests that the difference between fear in humans and animals is that we experience fear as a feeling. He compares it to the creation of a soup, with different ingredients such as survival circuit activity, brain arousal, body responses, feedback, memories, thoughts and predictions.3 In the presence of these different neural ingredients, fear emerges similarly to the way the essence of a soup emerges from its ingredients and gives rise to our particular flavor of fear which could involve any or all of the four types of fear.

So what are the four types of fear? 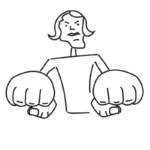 Let’s start with the most well-known—fight. Fight is an active defensive behavior, meaning that it needs movement for it to occur. On the surface, fight looks like anger. Most of us can’t discriminate fight fear and anger.  So how do I know if I’m in fight? Body characteristics of fight-fear include increased heart rate, adrenaline release, pupil dilation, and elevated muscle tone. One way to differentiate the two is to notice the body sensations of anger (clenched jaw, tight neck/back) and the body sensations of fear (typically located in the belly area). 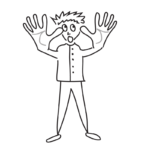 Freezing in fear is another well-known fear reaction and is a passive (non-moving) defensive behavior present in many species including mice and humans.4 Freezing is a simple, yet powerful avoidance strategy that reduces motion and visibility, supporting the gathering of information and increasing the chance of disengaging the predator’s attention. Freezing in humans is characterized by reduced heart rate and decreased movement. The physiology of freezing involves both the sympathetic and parasympathetic nervous system.5, 6 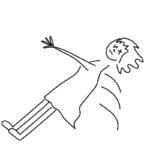 For many animals, their defensive strategy is actually picking from a menu of options—freeze first, flee if you can, and fight if required. Some species have other options available, such as playing dead (which also called tonic immobility). The equivalent of this in humans may be “faint”. Tonic immobility is a threat‐related response characterized by physical immobility and muscular rigidity in the face of extreme fear and inescapability. Although rare in the general population, it is often reported in PTSD patients. One theory is that faint, or collapsed immobility (both passive fear defenses), might be a version of this response and takes place later in the defensive cascade, when the threat is inescapable and no other defensive responses remain. 5, 6, 7 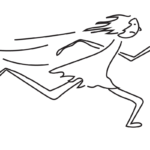 Flee (flight)—an active defensive behavior essential for survival in the face of threat. The purpose of flee or flight is to create space between the predator and prey thereby increasing the prey’s chances of escaping.

From Fear to Here—Fear Melters®

What solutions do we have to shift us out of fear easily? Fear Melters® 8 assist us in moving out of the defensive behaviors engaged by our nervous system by activating the opposite pathways in the brain. e.g. If I am in fight fear, an active defensive behavior, then movements and actions that activate a more passive state are likely to alter the feeling of fear and activate different neural pathways in the brain. Most people have difficulty in controlling their responses whilst in fear and unconsciously shift into a combination of the four types of fear. Shifting between different passive and active defensive modes happens in a part of the brain called the ventromedial prefrontal cortex (vmPFC).

The Fear Melters® are designed to rewire our automated neural patterns as an easy first step in unlocking the fear response, giving us choice and freeing up resources in the body, such as working memory. They may also help alter breathing rates so that serotonin is released. Supporting ourselves in the midst in fear rather than trying to get rid of it, allows us to liberate the energy from our defensive reactions while breaking the cycle of repeated adrenalization. Ultimately when we develop new habits, we can adapt to, and overcome repeated behaviors driven by fear.