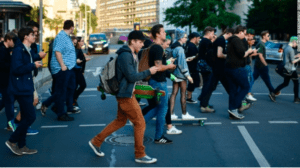 Economics is the study of how scarce resources are allocated; whether that is housing, food, or money. However, in an era of endless amounts of information at the hands of our fingertips, what is the scarcity? Unlike the first three examples that can be empirically quantified and measured, our intangible yet extremely valuable attention is the limiting factor: we are in the age of the attention economy.

The American Psychological Association defines attention as “a state in which cognitive resources are focused on certain aspects of the environment rather than on others.” Attention comes in many forms: love, recognition, obedience, and help. Although theoretically unquantifiable, many derive attention’s value from how much time we focus on a particular thing. We face attention’s scarcity every day; while “paying attention” to one thing we ignore others. Similar to money, we exchange attention; you are reading this article right now and probably ignoring the other work you have to do (sorry for bringing that up).

The term “attention economy” was coined by psychologist, economist, and Nobel Laureate Herbert A. Simon, who posited that attention was the “bottleneck of human thought” that limits both what we can perceive in stimulating environments and what we can do. He also noted that “a wealth of information creates a poverty of attention,” suggesting that multitasking is a myth. Later, in 1997, theoretical physicist Micheal Goldhaber warned that the international economy is shifting from a material-based economy to an attention-based economy, pointing to the many services online offered for free. As fewer people are involved with manufacturing and we move away from an industrial economy, emerging careers work with information. Although the “information economy” is a common name for this new state, Goldhaber rejects this; information is not scarce, attention is.

Like money, we all crave and need attention to a certain degree. Money is needed for food, water, and shelter. Similarly, attention can be translated to such tangibles necessary for survival. As babies, we cry, laugh, make noises, and want the attention on us—otherwise we are not fed, clothed, or do not survive. However, money and attention are distinct; money follows attention, whereas the reverse is not necessarily true. As our economy becomes more dependent on attention, the medium of exchange flows from the holders of the old to the holders of the new.

Our attention has always been limited, valuable, and scarce. But what distinguishes the present day is that technological advances have made an overwhelming amount of information available, strategically aimed at capturing our attention. As for the general public, it has never been easier to garner such personal levels of attention though means like social media.

When we go on the internet, we typically have a goal in mind, like finding an answer to a question or conducting research. Once we obtain what we want, we leave the site. However, social media keeps us on the platform longer and wanting more. Once we see a platform or user we like, we “subscribe” to them on YouTube, “become friends” with them on Facebook, or “follow” them on Instagram or Twitter. Thereafter, anything they post will appear on our feeds. Anyone can set up an account and have the opportunity for their presence to be seen by millions, but this also increases the pressure to capture more of the increasingly scarce resources of attention. As our online social media presence is defined by numbers—number of “friends,” “followers” vs. “following,” “likes,” and “subscribers”— comparison is easy. Furthermore, social media sites’ “explore pages” throw endless information at us, hoping that one picture, hashtag or video will interest us. We can scroll endlessly on social media, and upon finishing a video we will always have a new one to auto-play. However, when we focus our attention glued to our phones, we forgo other opportunities.

It is difficult to determine the impact attention-grabbing sites can have on the economy and society as a whole. As UC Berkeley economist Stefano DellaVigna and Bocconi University economist Eliana La Ferrara note, it is necessary to not only consider the direct effects of exposure to social media, but the crowding out of other activities, known as the substitution effect. Since technology rapidly advanced in the past decade, much of the observed effects are unknown. The two economists do report, however, is that in the United States in 2013, the average amount of television an American watched per day is 2.7 hours, approximately half of leisure time (perhaps now, more of this statistic is attributed to social media). Furthermore, once interrupted, it is incredibly difficult to return to one’s original task; UC Irvine Informatics professor Gloria Mark reports that it takes an average of 23 minutes and 15 seconds to get back on track.

Just as our nation faces extreme levels of wealth inequality, we also see attention inequality. Stars have amassed massive followings; the most followed Instagram user, soccer player Cristiano Ronaldo, has over 205 million followers (which is more than the population of all but four of the ten most populous countries). The personal lives of celebrities are showcased throughout the media for the world to see, and such stardom makes them appear less and less human.

Many firms understand the scarcity of our attention, and are adapting their business models to capitalize on it. For instance, music streaming services like Spotify have two revenue streams; you can either monetarily pay for ads to disappear, or pay with your attention and listen to ads. In the book Hooked: How to Build Habit-Forming Products, Nir Eyal attests that technology companies use Harvard psychologist B.F. Skinner’s well-known study that rewards, especially at variable intervals, increase one’s anticipation. As anticipation increases, such reward-seeking actions that technology companies have capitalized on to capture attention turn to instinct. Eyal argues “When you’re feeling uncertain, before you ask why you’re uncertain, you Google. When you’re lonely, before you’re even conscious of feeling it, you go to Facebook. Before you know you’re bored, you’re on YouTube. Nothing tells you to do these things. The users trigger themselves.”
Many of us members of “Generation Z” reached our teenage years just as social media was emerging. The insecurities we had, the personas we wanted to portray, and the desire to feel like we belong come with being a teenager merged seamlessly with social media’s design of “bridging us together” and garnering more and more attention. When looking at social media’s societal impact, Tristan Harris, founder of the Center for Humane Technology and former Google design ethicist and product philosopher, suggests that it is monumental. Harris asserts “Behaviour design can seem lightweight, because it’s mostly just clicking on screens. But what happens when you magnify that into an entire global economy? Then it becomes about power.” As we continue to drown in a surplus of stimuli trying to capture our attention, perhaps we must focus on paying attention to what we pay attention to.