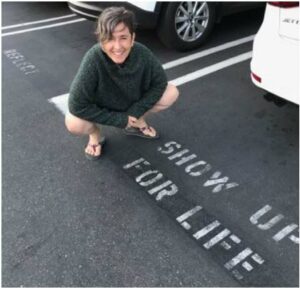 Recently my mentor Kathlyn Hendricks was talking about the concept of how at first the whispers of things in our life that need our attention appear like a feather’s tickle, and if we don’t face what’s showing up, the Universe will eventually deliver the message like a sledgehammer. I have definitely noticed this pattern in my own life and I committed years ago to listening to the feather. I don’t always get it right, but for the most part, I’ve allowed myself to enjoy the ease that comes with facing what is up for me directly before the WHAM of the sledgehammer.

Somewhere that I notice this “feather or the sledgehammer” concept showing up is in the dance of limbo that many people find themselves in with commitment. I’ve typically been quick to transition into changes and accepting what comes with my decisions. I actively avoid limbo because I know that it’s a hazardous place to be navigating. When we’re in limbo we aren’t fully located and instead are moving our energy between two fields, playing a kind of Hokey-Pokey with our life. I wrote this blog about limbo, if you want to learn more about it.

Do you find yourself doing the dance of ‘I want to’ and ‘I don’t want to!’ about something you have already committed to? Something that deep inside you know you really want? A couple of years ago I noticed a friend was stuck in a pattern of being hijacked by fear and it went something like the following:

and then what came next was…

:::::totally off in distraction land, losing connection with self and goals::::

And the following limbo DANCE BEGINS…

“maybe this isn’t the right path for me”

“If I really wanted this, I’d be taking action”

“If I really wanted this I wouldn’t get distracted.”

::::pausing to breathe, use Fear Melters®

Rinse… repeat… over and over again until something interrupts the cycle. This can sometimes be where the feather turns into the sledgehammer because when we aren’t present in our life we tend to cause upsets. Often work or relationship struggles arise because we aren’t in integrity with ourselves.. When we aren’t being real with ourselves and others it’s like having a pebble in our shoe. The pebble is in the background, getting more painful the more we ignore it.

Here is where I made an important suggestion to my friend: “Hey, how about you just skip that part?” I had noticed a pattern of this limbo dance over and over again and I realized that it was simply FEAR showing up. I could see that my friend was committed to their goal AND was scared, rather than on the wrong path. I suggested that they stop questioning their commitment and instead simply face that they were scared. This might sound too simplistic, but it worked. They made the decision that next time they drifted from their commitment that they will presence their fear, recommit and move on. They would skip the part where they beat themselves up and questioned their decision.

We have brain patterns, unconscious habits, that keep us stuck and we can rewire our brains by bringing awareness to these unwanted patterns and making one change. It doesn’t take a lot to make a change, but it does require consistent easeful effort. Often we make things hard by pushing ourselves and losing presence. When we are on the path of a new goal, we’ll have to gather our energy to initiate it, but eventually we’ll be rewarded by new habits that support the life we want.

It is hard enough to stay on the path to a commitment without the added stress of self criticism and questioning oneself. If you know you want something but are struggling to stay on the path, let yourself face your fear. Ask yourself what it is that you aren’t facing directly. Perhaps you are scared of failing, or you don’t think you have what it takes. This might turn out to be true but you’ll never know unless you put your whole self in and do it in spite of your fear. And you will likely stumble and take wrong turns because making mistakes comes with trying new things. It requires courage to be willing to make mistakes in front of others and courage is something we can choose. I love what Brenè Brown writes about courage:

“Courage is like—it’s a habitus, a habit, a virtue: You get it by courageous acts. It’s like you learn to swim by swimming. You learn courage by couraging.”

I love this and have found it to be true. I also see that the mistakes I made led to greater awareness and helped me on my path; it is arguable whether they were indeed mistakes.

Here are three steps you can take to help you with new commitments:

Make a clear commitment. Use your full body to literally step into the commitment by stating it out loud: “I commit to ” as you physically step forward. Notice your body sensations, see if your whole body is ready for this commitment.

If you notice fear, remember that fear is simply energy moving through. Take three connected belly breaths, move your body in ways that feel good, and try the commitment process again. Allow yourself to play with your commitment rather than have it feel like a burden. If you notice yourself getting serious, move around, and breathe deeply until you feel connected again. Bring in some play, it’s a great antidote for fear.

When you get distracted skip the part where you criticize yourself for wandering off your path. Remember that recommitment is part of the process. Let yourself feel whatever feelings that might arise, fear, sadness, anger, and then let your whole body recommit by stepping forward as you state: “I recommit to “.

Sometimes we commit to something that winds up being wrong turn or dead end. I find that by using our whole body intelligence, that will become evident sooner, the more you show up. Another part of stretching towards a goal is finding a new goal along the way. It is important to hold loosely to our goals, allowing ourselves to make adjustments along the way, while learning, growing and move forward. Failing is not fun, but it sure beats being stuck in limbo, or never trying at all.

What I notice is that the Universe rewards our efforts. When we show up fully, support shows up, the stars align, and the path slowly becomes easier and more clear. Stepping into a commitment is the only real way to create a fulfilling life, and though you will have to make that first step yourself, the helpers will show up and you’ll begin to experience being in the right place at the right time. Try it and when your doubts creep in remember to skip that part!