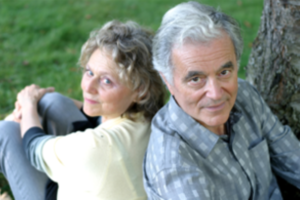 Jack and I have been involved as co-facilitators in a Conscious Aging Program where we met some wonderfully creative people, some shy, but all open to being their best self. We were 12 people over 8 weeks, exploring through meditative reflection, journalling, dyad communication, and group work several common threads we experience as folks between 60 – 80 years of age. By these means and with inspirational topics, readings and poems as well as inviting a couple of “expert speakers” in the area of palliative care, we began to talk frankly about facing death and dying and opening up to our fears around aging with illness and the dying process itself.

As we reached that point, Jack and I brought in the fear responses and fear melters, as ways to notice our fears, not get stupid by them (oops, I meant stopped), and rather let our feelings move through us and flow. We did this after some individual investigative work through writing, movement, and dyads.

In a circle, standing up, we set the stage for naming our greatest fear and where and how it shows up in the body. Beginning with ourselves, we each introduced how fear was showing up in our own body when we named our fear. Then we introduced the fear melters with a short explanation, asking people to try out the fear melters along with us.

Every individual in the circle got to name their fear, feel into where it lives in their body and try on one or more of the movements associated with melting their fear. People also chimed in when they recognized a similar fear response: fight, flight, freeze, faint. Each time, we all joined in each other’s melting movements. People began to feel the freedom and clarity these movements can bring along with the recognition of how fear shows up differently and the same in us individually. Lots of closed throats, constricted hearts, and fluttering bellies revealed; and with this discovery and authentic sharing, laughter, free expression, and understanding. Wiggling and root showed up frequently along with reaching and gathering. In voicing appreciation in our closing circle, people noted how consciously moving through their fear and releasing through their bodies beats just talking about it.

It is something we will do more of in our forthcoming sessions.

Here is the Fear Melters® video: